All Departments · The Catholics of Ulster (Hardback) 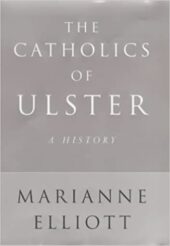 There can be few European communities more soaked in their bloody history than the Province of Ulster, but the Catholic and Protestant communities' faulty understanding of their past has had ruinous effects on the lives of its inhabitants. In The Catholics of Ulster, Marianne Elliott slices through this dense thicket of obscuring myth, lies, and half-truths and emerges into the relative clarity of history. Some of Elliott's provocative claims include: There was no such thing as a Gaelic Catholic race. The Catholic gentry was decimated through conversion to Protestantism, not exile and dispossession. Catholic landowners often welcomed Scottish and English tenant farmers in Ulster. The English were not as culpable as previously claimed in exacerbating the Potato Famine. Arriving at a fragile juncture in the uncertain peace process, The Catholics of Ulster is sure to spark great controversy, inflame passions, and provoke spirited debate.

She has played an important role in promoting Northern Ireland peace efforts, notably co-writing the 1993 report of the Opsahl Commission, 'A Citizens' Inquiry'. She was awarded an OBE for services to Irish Studies and the peace process in October 2000 and she was also recognised with the Irish Presidential Distinguished Service Award in 2017.

Marianne is internationally recognised as one of Ireland's leading historians and is best known for her acclaimed biography, Wolfe Tone: Prophet of Irish Independence (1991). Other books include Partners in Revolution: The United Irishmen and France (1982), Robert Emmet: The Making of a Legend (2003), The Catholics of Ulster: A History (2000), When God Took Sides: Religion and Identity in Ireland (2009) and Hearthlands: A Memoir of the White City Housing Estate in Belfast (2017).

She lectured in history at Birkbeck for two years, before returning to Liverpool in 1993 - where she had earlier been a research fellow - as Professor of Modern History. A Fellow of the British Academy and an Honorary Fellow of the Royal Irish Academy, Marianne delivered the prestigious Ford Lectures at Oxford University in 2005.

“Be Careful, Don’t Rush”: Celebrating 150 Years of train travel between Holywood and Bangor£10.00