All Departments · Surnames of Ireland 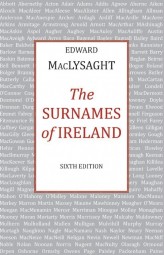 Ireland was one of the earliest countries to evolve a system of hereditary surnames. More than 4,000 Gaelic, Norman and Anglo-Irish surnames are listed in this book, giving a wealth of information on the background and location of Irish families. Edward MacLysaght was a leading authority on Irish names and family history. He served as Chief Herald and Genealogical Officer of the Irish Office of Arms. He was also Keeper of Manuscripts of the National Library of Ireland and was Chairman of the Manuscripts Commission.
Surnames of Ireland, which was first published in 1957 and now is in its sixth edition, is being reprinted for the fourth time and remains the definitive record of Irish surnames, their genealogy and their origins.

Appendix I: English and Scottish Surnames in Ireland

Edward MacLysaght (6 November 1887 – 4 March 1986) was one of the foremost genealogists of twentieth century Ireland. His numerous books on Irish surnames built upon the work of Rev. Patrick Woulfe's Irish Names and Surnames (1923) and made him well known to all those researching their family past. MacLysaght was born in Flax Bourton near Bristol, England to a Cork father and a Lincolnshire mother. He attended school at Nash House, Bristol, and later attended Rugby School. He then entered Corpus Christi College, Oxford where he studied law but spent only two terms there having injured himself during a rugby match.