All Departments · Stormont: The House on the Hill 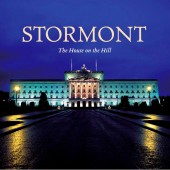 Since it first opened in 1932 , Parliament Buildings has been at the heart of Northern Ireland's political, social and cultural life. Since then it has witnessed the decline of the linen and ship building industries, the Second World War and the bombing of Belfast in the Blitz, rapid social and demographic change and, of course, the 'Troubles'.

Nowadays at Stormont, protest and debate sit comfortably alongside Pavarotti and Elton John concerts, World Rally Championships and Chinese New Year celebrations. The Assembly Executive and MLAs, supported by the Assembly Commission and Secretariat, make full use of Parliament Buildings to help everyone in Northern Ireland work towards a common vision of the future - one that is peaceful, inclusive, prosperous and fair.

Stormont: The House on the Hill takes the reader on a tour of Parliament Buildings and its grounds, and it is dedicated to all those who have lived through difficult times to enjoy the first decade of a new millennium in which the prospect of peace has become a reality.

Sorry, we have no information on Jack Gallagher.

Derry beyond the walls£4.99