All Departments · The Stones that Ground the Corn: The Story of an Irish Country Grain Mill 1850-2000 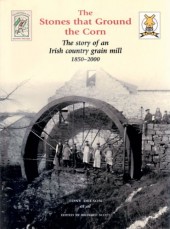 The Stones that Ground the Corn is the story of an Irish country grain mill from its establishment in the traumatic times of the Great Famine to its recent assimilation with one of Northern Ireland's most successful business enterprises.

Now in its sixth 'Scott' generation the family business of W & C Scott is a remarkable record of continuity, progress and diversification in the face of a series of challenges both on a world scale and at the local level over a century and a half. Today the highly automated mill produces annually over 100,000 tonnes of animal feeds on the same site where the original water mill was William Scott in 1850.

But this is not simply another book about a family business, however absorbing the Scott's story unquestionably may be. The role the mill has played in the development of the local community is featured in the story that unfolds. There is a chapter on the history of the town of Omagh and a description of the town as it was in William Scott's day. Another provides a brief history of the ancient practice of milling, the world's 'second oldest profession'. And the contribution of a loyal workforce representing characteristic mutual understanding between the employer and employee, is closely woven into the fabric of a fascinating tale which will entertain and inform the local historian, the genealogist, the folklorist and, above all, those who have a strong affinity with Omagh and the region it serves.

The volume is further enhanced by two literary contributions: -

Benedict Kiely, a distinguished son of Omagh and one of Ireland's most celebrated novelists, short story writers, essayist and broadcaster, provides a Foreword that brings vividly to mind the county town of his youth.

The poems of W F Marshall complement the historical text with a nostalgic view of the Tyrone countryside in the early years of the twentieth century. Indeed, the book's title is taken from Marshall's 'The Centenarian', written in 1950 to commemorate the foundation of the Scott mill a hundred years earlier.

Appendix I: Jottings from a Muller's Notebook, 1916

The principal author, DR TONY DEESON, counts himself a very lucky man. For well over fifty years he has been able to indulge his three passions for research, writing and history, and as a result has produced over sixty books as well as many lesser items. The majority of his output has been devoted to corporate histories of companies, institutions, socities and other organisations.