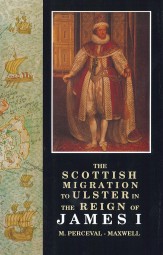 Dr Perceval-Maxwell, himself a descendent of seventeenth-century Scots settlers taught for many years In McGill University, Canada. In this seminal analysis of Scottish migration to Ulster he examines the society that produced the Scottish settlers, describes the conditions that they encountered when they arrived in Ireland, and explains what effect the Scottish migration had in both Ireland and Scotland. Short biographies of the principal planters are included and also maps, showing patterns of settlement.

This book is the work of an Ulsterman who is himself the descendant of seventeenth-century Scots settlers and who taught in McGill University in Canada. His own roots, combined with his academic detachment, make him a person ideally suited to present this account of settlement in seventeenth-century Ulster. He has drawn uopn a wide range of sources both manuscript and printed and I feel that he has filled a notable gap in our knowledge and understanding of this period.