All Departments · Scotch-Irish Merchants in Colonial America: The Flaxseed Trade and Emigration from Ireland, 1718-1755 (eBook) 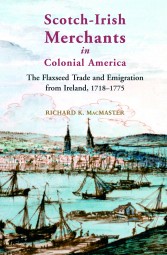 During the course of the eighteenth century, migration from Europe and Africa shaped the emerging consciousness and culture of the American Colonies. Whether free, bond servant, or slave, migrants brought skills and folkways from their motherlands, contributing to the agricultural and commercial development as well as to the peopling of North America. Emigrants from Ulster, the northern province of Ireland, did all of this and more. Ulster exported an economy.

Scotch-Irish Merchants in Colonial America tells the story of the transatlantic links between Ulster and America in the eighteenth century. The author draws upon a remarkable range of sources gleaned from numerous repositories in America and Ireland as he explores the realities of life and work for the merchants. The trading networks and connections established and the economic background to the period are examined in some detail. Scotch-Irish Merchants in Colonial America: The Flaxseed Trade and Emigration from Ireland, 1718-1755 provides fascinating insights into the connections between Ulster and Colonial America through the experiences of the Scotch-Irish merchants. The chapter titles are: