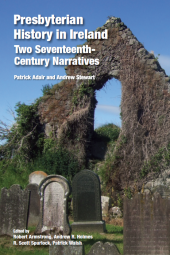 This volume makes available to a modern audience two seventeenth-century texts that are critical to our understanding of the emergence of Presbyterianism in Ireland. Patrick Adair’s ‘True narrative of the rise and progress of the Presbyterian Government in the north of Ireland’ can be considered the origin text of the Ulster Presbyterian historical tradition. It is the earliest known account of the emergence of Presbyterianism in the province, covering the period from the 1620s to c. 1670, and was written by someone who witnessed at first hand many of the episodes he describes. This fresh edition is based on the earliest surviving manuscript copy
of Adair’s text held by the Presbyterian Historical Society of Ireland.

Andrew Stewart’s ‘Short account of the Church of Christ …’ is drawn from the manuscript in the Wodrow collection of the National Library of Scotland and is published in full for the first time. Stewart presents the history of Christianity in Ireland from the time of St Patrick to his own day, in the process providing a reinterpretation of the Irish religious past from a Scottish perspective. Stewart’s work complements that of Adair in placing the emergent Presbyterian tradition within a longer-term perspective, one which stretches all the way back to the ancient origins of Christianity in Britain as well as Ireland, and the fresh beginnings which Stewart saw as occurring in his own lifetime.

The texts and introductory essays were prepared by a team of scholars working under the ‘Insular Christianity’ project based in Trinity College Dublin and University College Dublin, and sponsored by the Irish Research Council for the Humanities and Social Sciences. Both texts are accompanied by an extensive set of newly written annotations which provide additional information on individuals mentioned, terms used, and the historical background to particular events. The introductory essays contextualise the work of Adair and of Stewart, both with regard to the history of seventeenth-century Ulster and the development of a Presbyterian historical tradition. The publication of this volume provides a major resource to those interested in Ulster and wider Irish history, and more especially the history of the Presbyterian tradition on this island.

Rediscovery, controversy, and identity:
the use of Adair's Narrative, c, 1825-1914
By Andrew R. Holmes

A short account of the Church of Christ...
By Andrew Stewart

Index of places
Both compiled by Patrick Walsh

Sorry, we have no information on Andrew Stewart.

Sorry, we have no information on Patrick Adair.