All Departments · Portrait of an Industrial City: Clanging Belfast 1750-1914 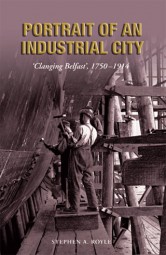