All Departments · Society and administration in Ulster's plantation towns 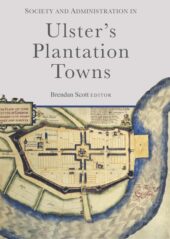 This book contains a number of essays concerning the rise and development of Ulster's plantation towns. Essays include:

Strabane in seventeenth century: a plantation town and its Hamilton landlords
William Roulston

Ulster's urban network, Dublin and the problem of the poor, 1600-1750
Patrick Fitzgerald

Markets and market towns in the Ulster plantation
Raymond Gillespie

Tracing Your Scottish Ancestors: A guide for Family Historians£12.99