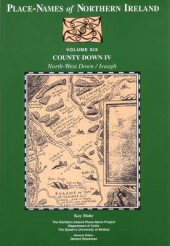 Place-names for many people form one of the most evocative parts of the landscape, and the study of place-names provides a revealing window on the land and its people. Many early Irish names for settlements, districts, hills and rivers are in use today, and most townland names are of Irish origin. Successive waves of Norse, Anglo-Norman, Scots and English settlers added to this rich tapestry, bringing some names with them from their former homelands and creating many more.

This major new series on the place-names of Northern Ireland concentrates on townland names. Early spelling of the names discussed have been abstracted from historical sources, and these provide the evidence necessary to reconstruct the original form of the name and trace its development down to modern times. Names are dealt with in their traditional civil parish units so that both the historical and local context may become clear.

This volume covers the north-west of Co. Down, from Rathfriland to Banbridge, Moira and Dromore. It contains the 11 civil parishes of Aghaderg, Annaclone, Donaghcloney, Dromore, Drumballyroney, Garvaghy, Magheralin, Magherally, Moira, Seapatrick and Tullylish, all within the barony of Iveagh, anciently held by the Magennis family. The front cover illustration is from Richard Bartlett's map of south-east Ulster which dates to 1603, and the cover logo is an Iron Age Celtic design from a standing stone found at Derrykeighan, Co. Antrim.