All Departments · The Rise and Fall of the Orange Order during the Famine Years: From reformation to Dolly's Brae 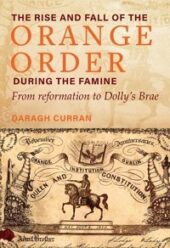 In the mid-nineteenth century, the Orange Order of Ireland fell into and emerged from apparent extinction into a vigorous resurrection - which was then stopped in its tracks at Dolly's Brae. This book explores the causes and consequences of these wrenching reversals of fortune that Orangemen went through at this pivotal time in history.

Formed in 1795, the Orange Order quickly grew into a formidable popular organisation, with a reported peak membership of 200,000. However some forty years later, against a background of major social, political and economic change, and in the face of mounting government pressure, the Grand Orange Lodge of Ireland made the forced decision to disband the Order.

This widespread Protestant association did not simply disappear - it continued to thrive at local level. By 1845 it had been officially revived amidst fears of renewed Catholic agitation, and within the next four years the Order had returned to its previous popular standing. This revival was far from straightforward: economic hardship, the devastation of the Famine, internal dispute, the widening of relations between the social classes and the issue of tenant right threatened to derail it. However, through it all, parades, processions and celebrations continued, and the Order’s core membership clung to their traditions.

The Order's revival gained momentum from the failed Young Ireland rebellion in 1848, which galvanized Protestant resolve. Offers of Orange assistance to quash the rebellion were not taken up, but for a brief period the Order could claim the government acceptance that the defeat of the rebels brought about. However, the notorious and fatal clash with Catholics at Dolly’s Brae, County Down, in 1849 invoked the ire of the government and brought the ascent of the Orange Order to a sudden and shuddering halt.

Dr Daragh Curran is an independent historian whose research interests include associational culture, Ulster politics, and the social history of Northern Ireland. He is the author of The Protestant community in Ulster, 1825-45: a society in transition (Four Courts Press, 2014).