All Departments · Men and Arms: The Ulster Settlers, c. 1630 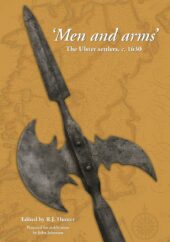 The Muster Roll of the province of Ulster is a large, leather-bound volume in the British Library. The volume consists of 283 folio sheets on which are recorded the names of 13,147 males from the nine counties of Ulster. Each county forms a separate section of the volume and the men who mustered are listed under the names of their landlords; beside each man's name is a description of the weapons he was carrying or a note that he was unarmed. Most of the men who mustered were English and Scottish settlers and, in the absence of comprehensive parish and estate records, the muster rolls is the nearest one has to a census of the British population of early seventeenth-century Ulster. This edition includes much supplementary information on the settlers, drawn from numerous contemporary sources.

The Muster Roll of Ulster