All Departments · Major-General Oliver Nugent: The Irishman who led the Ulster Division in the Great War (Paperback) 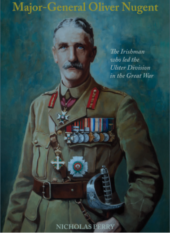 Note: This title will be published in May/June 2022.