All Departments · Lough Neagh: An Atlas of the Natural, Built and Cultural Heritage AND Wonders and Legends of Lough Neagh Bundle 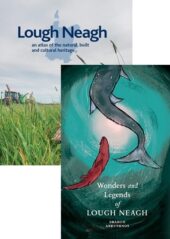 Lough Neagh: An Atlas of the Natural, Built and Cultural Heritage

It is impossible for any observer to look at a map of Ireland and fail to notice the expanse of blue in the centre of Northern Ireland denoting what many have described as a freshwater inland sea. Standing on the shoreline, whether it be in Ballyronan, Washingbay, Oxford Island or Antrim, one could easily be transported to some coastal seascape but for the faint outline of the opposite shore, often set in a haze by the winter drizzle or the summer heat.

This is Lough Neagh, the largest lake in these islands. It is the scale and geography that makes Lough Neagh such a unique heritage feature. This cascades downwards to incorporate the natural environment, archaeology, historical structures and communities. For millennia people have lived by the lough and earned a livelihood along its shoreline and on its waters. The enigmatic beauty and effervescence of the lough has inspired poets and authors, singers and songwriters.

Bringing together archaeologists, geographers, historians, scientists and other experts in their field, many with a strong connection to Lough Neagh, this beautifully illustrated volume includes 50 essays which explore the diversity of interactions between the people of the lough and the natural, cultural and built environment from the earliest times to the present day.

Wonders and Legends of Lough Neagh

DR LIAM CAMPBELL was appointed Director of the Mellon Centre for Migration Studies in 2021. He spent the previous five years as the Built and Cultural Heritage Officer at Lough Neagh Partnership. He has published widely on heritage and environmental issues, especially about the north-west of Ireland.

DR WILLIAM BURKE has been the Programmes Manager for Lough Neagh Partnership since 2016. He has research interests across quaternary geology and landscape history and contributes to a number of community development organisations and initiatives.