All Departments · The Irish Diaspora 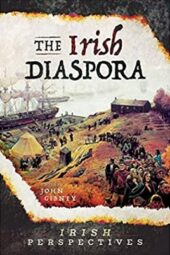 Ireland is known worldwide as a country that produce emigrants.

The existence of the Irish diaspora' is the subject of this fifth instalment of the 'Irish perspectives' collaboration between Pen and Sword and History Ireland. From the early Christian era Irish missionaries travelled across Europe, from the early modern period Irish soldiers served across the world in various European armies and empires, and in the modern era, Ireland's position on the edge of the Atlantic made Irish emigrants amongst the most visible migrants in an era of mass migration. Ranging from Europe to Africa to the Americas and Australia, this anthology explores the lives and experiences of Irish educators, missionaries, soldiers, insurgents, from those who simply sought a better life overseas to those with little choice in the matter, and who established an Irish presence across the globe as they did so

John Gibney is a historian attached to the Royal Irish Academy's Documents on Irish Foreign Policy Project. He is a long-time contributor to History Ireland and is the author of A short history of Ireland, 1500-2000 (Yale University Press, 2018).