All Departments · A Bloody Week: The Irish At Arnhem 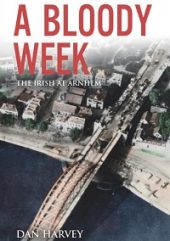 The Battle of Arnhem was a major World War II battle at the vanguard of the Allied Operation Market Garden, the dramatic but unsuccessful campaign fought by the British Army in the Netherlands from 17 to 25 September 1944. This was the first-time airborne troops were used by the Allies on such a scale, and the objective was a series of nine bridges that might have provided an Allied invasion route into Germany. Airborne and Land Forces successfully liberated Eindhoven and Nijmegen but were thwarted by the Nazis at the Battle of Arnhem, in their efforts to secure the last bridge over the River Rhine.

Born and raised in Blackrock in County Cork, Harvey served in the Irish Defence Forces from 1978 to 2017, retiring with the rank of Lieutenant Colonel. He served in Ireland during the Troubles, mainly with the Southern Brigade, and saw active service overseas as a peacekeeper in Central Africa, Lebanon, Kosovo, the South Caucasus, and Vienna. As an author, Harvey has written extensively about the history of the Defence Forces, the Troubles, and the involvement of Irish men and women in significant battles such as Waterloo and D-Day. He now lives in Paris.

While serving in the Defence Forces, Harvey also worked as the museum curator for several award-winning military exhibitions in Ireland, including at Collins Barracks and the National Museum of Ireland. He is a longtime contributor to An Cosantóir, the magazine of the Irish Defence Forces. He was a military advisor on the 2006 Irish war drama film The Wind that Shakes the Barley.

Harvey is the nephew of former Taoiseach Jack Lynch.