All Departments · George Best Will Not be Playing Today 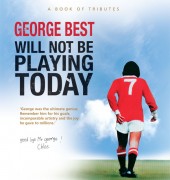 George Best was unique, both in terms of his talent and also his personality, and thousands of people were compelled to pay their respects after his death in November 2005, leaving messages in the books of condolence that were often heartfelt and deeply personal. Many were witty and humorous, echoing George's sense of fun, and all were of great comfort to the family.

George Best Will Not be Playing Today is a record of the public's overwhelming response to George's death and their wish to commemorate his life. The book is interspersed with scanned original handwritten messages together with a wealth of colour photographs and other unique and never before seen images.

Sorry, we have no information on Barbara McNarry.

The Origins and Development of Football in Ireland: Being a Reprint of R.M. Peter’s Irish Football Annual of 1880£9.99