All Departments · From Ulster to Canada: The Life and Times of Wilson Benson 1821-1911 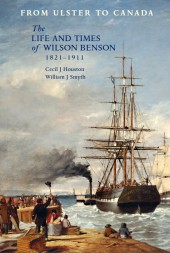 Canada is as much a nation of immigrants as the United States. And what is the link between this, the second largest country in the world, and the province of Ulster? No Country contributed more to the establishment of Canada than Ireland. And of the 500,000 souls who arrived there in a constant stream in the generation before the Great Famine, the vast majority originated in Ulster. Canadian identity continues to be characterised by this significant Ulster cultural contribution. In Ontario particularly, the Ulster presence was evident throughout a broad swathe of land stretching almost 1,000 kilometres from the Quebec border to the USA frontier at Detroit. These two great stories, Of Ulster migration to and settlement in Canada, unfold intriguingly in this scholarly and accessible book. Recently-married Wilson Benson emigrated from Co. Armagh in 1841, lived for another 70 years in Ontario and left behind a detailed autobiography. It recalls, firstly, his youth in Ulster and goes on to narrate in engaging detail his varied and indomitable attempts to establish himself in his New World, and absorbing tale that amply informs our understanding of the nineteenth-century migration experience. Wilson Benson's perceptive life history is of value not only to emigrant and family historians but is also a near-unique account of both Ulster society on the cusp of the trauma of the Famine and the emergence of early modern Canada

Life and Adventures of Wilson Benson   83
(Written by Himself)

Cecil J. Houston is professor of Geography at the University of Toronto.

Sorry, we have no information on William J Smyth.