All Departments · Friends in High Places: Ulster's Resistance to Irish Home Rule, 1912-14 (Read while you wait) 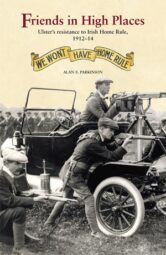