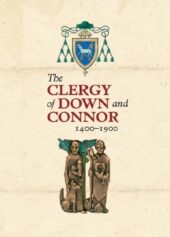 This volume provides brief biographical details of the countless clergy who have served in the Catholic Diocese of Down and Connor from the medieval period through to 1900. The research is the culmination of years of effort by the late Canon George O’Hanlon and the late Monsignor Ambrose Macaulay, hugely admired church archivists, historians and authors.

The book highlights the major contribution of the clergy to the Church during pre- Reformation times and the Penal Era, as well as the crucial period of expansion in the nineteenth century. This is a work that will have considerable appeal for those interested in ecclesiastical history in general and specifically in the development of the Catholic Church in County Antrim and in north and east County Down. It will also help genealogists and local historians interested in building up a picture of families associated with the Church in this northern diocese.

Monsignor Ambrose Macaulay (1934–2019) was educated in St Malachy’s College, Queen’s University Belfast and the Pontifical Lateran University in Rome. He was ordained in March 1960 and obtained a Doctorate in ecclesiastical History at the Pontifical Gregorian University, Rome (1963).

He was best known for his role as PP at St Brigid’s (1989–2010) and as an ecclesiastical historian. In 1994 he was appointed a Prelate of Honour to His Holiness with the title Monsignor.

He was ordained in 1957 serving in a number of different parishes and in different roles until his retirement in 2014. He was appointed Canon and a Member of the Diocesan Chapter in 2002 and held the position of Diocesan Archivist from 1983 to 2014.