All Departments · The Catholic Community in the Seventeenth and Eighteenth Centuries 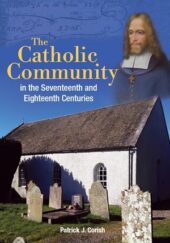 The Catholic Church has been a very important presence in the history of modern Ireland. The seventeenth and eighteenth centuries are in a very real sense the time when it took on the form that made it such a weighty social force in the life of the nation.

This publication studies a community moulded by several forces. The two most important were the penal legislation and the mission of tridentine Catholicism. Within it, there were wide diversities of experience, diversities between one region and another, and diversities between the different social classes. The ‘Penal Days’ were indeed penal, but they were not quite the simple story of uniform deprivation that our legend would like to make them.

This edition includes an introduction by Prof. Thomas O’Connor which considers the career developments of Patrick Corish as historian, university teacher and writer; his major achievement in revolutionising how church history was taught in his role as professor of modern history at Maynooth (building on the work of his predecessor, Cardinal Tomás Ó Fiaich); his legendary ability as a lecturer; and one of the best known and most respected scholars on the island of Ireland.

Patrick Corish (1921 - 2013) was a priest of the Diocese of Ferns, born in Ballycullane parish in County Wexford. He is best known as a distinguished Irish historian and a President of St. Patrick's College, Maynooth. For many years, he was Professor of Ecclesiastical History in Saint Patrick's College Maynooth, in succession to the late Cardinal Tomás Ó Fiaich.

Although he published many academic articles and was in demand as a reviewer Corish is best known for two books: The Irish Catholic Experience(1985), a one volume history of Catholicism in Ireland, and Maynooth College 1795-1995 (1995), published for the bi-centenary of Maynooth College. In addition, he was editor of the sources journal Archivium Hibernicum.

He had an extraordinarily long association with Maynooth College which started in 1939 when he arrived to commence his studies for the priesthood. He was ordained in the College Chapel on 17 June 1945, received a Doctorate in Theology and was appointed Professor of Ecclesiastical History in Saint Patrick's College, Maynooth in 1947. Twenty years later, in 1967, he was made College President but served only one year before resuming his duties as Professor of Ecclesiastical History. He was succeeded as President by Jeremiah Newman.

In his retirement, he took great delight in developing the rock garden which was part of the original walled garden in the College. In 1984 he joined the Alpine Garden Society and raised many plants from seed in the quarter acre garden.