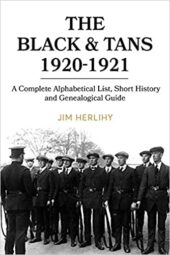 From 6 January 1920 recruiting to the Royal Irish Constabulary (RIC) was extended outside of Ireland to candidates with military experience, in order to supplement the native Irish force, then depleted by massive resignations, IRA attacks and campaigns of social exclusion. This new force was called the RIC Special Reserve. By July 1921 a total of 7,684 candidates recruited in Britain (381 Irish-born) had arrived in Ireland. From 3 September 1920 a second and separate group of 2,189 ‘temporary constables’ (312 Irish-born) were recruited and attached to the newly-opened headquarters of the motorised division of the RIC at Gormanston Camp in Co. Meath. A third group, known as the Veterans and Drivers Division, attached to Gormanston Camp comprising of 1,069 (189 Irish-born) men, were also recruited. Due to the huge volume of recruits being immediately required and arriving at short notice, there was a shortage of regular ‘rifle-green’ RIC uniforms available; accordingly, the new recruits were initially given ill-fitting khaki trousers and green tunics or vice-versa and collectively by March 1920 gained the moniker ‘Black & Tans.’ Even though the uniform situation was sorted by December 1920, the title ‘Black & Tans’ would remain long after into history.

In this book Jim Herlihy lists alphabetically every individual member of these three distinct groups. The lists include the RIC registered number, birth year, native country and county, religion, the recruiting office where they enlisted, whether they had served as a soldier or as a sailor, previous occupation and whether they resigned (with the given excuses), were discharged or dismissed, pensioned or disbanded, or killed or died in the service.

The book also includes a chapter on tracing and identifying ‘Black and Tan’ ancestors in the RIC Nominal Roll of 1 January 1921 with several sets of appendices.

The Catholic Community in the Seventeenth and Eighteenth Centuries£11.99