All Departments · Handed Down: Country Fiddling and Dancing in East and Central Down 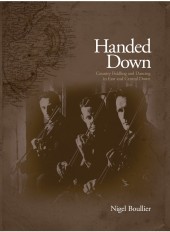 Handed Down: Country Fiddling and Dancing in East and Central Down documents the traditional fiddle playing and dancing culture in County Down, in particular areas to the east and centre. Spanning over three decades in its development, this book presents a snapshot taken in 2012. The project is unique within traditional music and dance in Ireland due to the demographic nature of the county ' the musicians, their music and dance, having been drawn from both unionist and nationalist communities.

Much of the material, including some 500 pieces of music, 30 dances and profiles on 300 fiddle players, has to date gone unrecorded. This led to research into the development of traditional music and dance in County Down, including the origin of many of the popular dances, the extensive network of dancing masters in the 1700s and how fiddle players practised their art in the late 1800s and into the twentieth century. Overall the project sheds fresh light on many of the commonly held perceptions regarding our culture.

In contrast to much of the currently archived material, the musicians profiled here were, by and large, ordinary practising fiddle players; likewise the dances were carried out by ordinary folk at a wide variety of social gatherings, making this an ideal window for looking at traditional music and dance as it was practised over a century ago.

Suffering serious decline as the twentieth century progressed and with most of the fiddle players and dancers having passed away, this previously rich culture continues to be practised by a diminishing number of musicians and dancers in, predominantly, rural areas of CountyDown. Handed Down: Country Fiddling and Dancing in East and Central Down presents current and aspiring traditional musicians, who have to date, in all likelihood, been unaware of the existence of this vibrant tradition, with a collection of tunes they can use to vary and increase their repertoire thus strengthening the culture as a whole. Similarly many of the dances which, having long fallen out of fashion in most parts of Ireland, can be reintroduced to the dancing fraternity.

Appendix I
Assessment of reels up to the year 1795 as collated in Sources of Irish traditional Music c. 1600-1855 Volume 1

Selected Bibliography and sources of Information

Nigel Boullier has lived all his life in Bangor, CountyDown and has been a practising traditional musician for over forty years. In addition to playing the fiddle and banjo he has, over the years, collected a considerable body of music. His early influences were from the Comber and Balloo sessions of the 1970s where the fiddle was the predominant instrument. Nigel has appeared on several television programmes broadcast on RTÃ, BBC and UTV, and whilst playing in occasional recitals heis more likely to be found amongst friends playing in music sessions and for local dances.