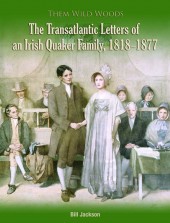 They reveal along the way the situation of Irish Friends in the first half of the nineteenth century, and the difficulties of making one's way, whether in unsettled Tyrone or settler upstate New York.

In Them Wild Woods: Irish Quaker Familys Transatlantic Correspondence, among other things, just about everyone who was anyone in Dungannon and its hinterland is mentioned for good or ill. Armagh, Dublin and Lisburn also feature, as do New York, Buffalo and Collins. There is everything here, from jilting to murders, bankruptcies to fashions, potato prices to politics. The events of the times stud the background. In Ireland, visits by Dungannon's absentee landlords, the proscription of unionist and nationalist parades, O'Connell's trial for sedition, the possibility 'of propelling vessels by steam', Queen Victoria's opening of the Queen's College, Belfast. In America, an encounter with Napoleon's brother, the opening of the Erie Canal, the ball given in New York for Charles Dickens, the abolitionist cause, various presidential elections, P. T. Barnum's hoax exhibition of the 'Feejee Mermaid'.

Appendix A:
Summary genealogies of the Greeves, Obrien and Sinton families

Appendix B:
The locations of the original Greeves, O'Brien and Sinton Letters