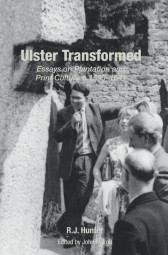 R.J. Hunter was regarded as the 'doyen' of historians of early modern Ireland, a highly respected scholar, much loved by his students and fellow academics. Ulster Transformed: Essays on Plantation and Print Culture c. 1590-1641 brings together a selection of his more significant scholarly works which primarily reflect his interest in the Ulster Plantation and includes articles on the progress of urbanisation and the social and economic impacts of these momentous times.

What is published in this volume is the nineteen essays of real substance that Robert produced over a 40 year period from 1964. They have been arranged thematically rather than chronologically and between them they cover seven counties in historic pre-partition Ulster with a cluster of articles on the print trade, focused on Dublin.

Ulster Transformed: Essays on Plantation and Print Culture c. 1590-1641 constitutes one of the five volumes in the R.J. Hunter collection. Other titles in this collection are: