All Departments · The Belfast Blitz: The City in the War Years (eBook) 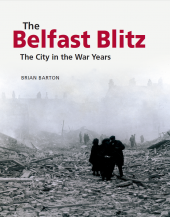 The Second World War was a titanic struggle against totalitarianism. It involved civilian populations – in the production of ships and armaments and as victims of aerial bombardments – as never before. In this respect, Belfast played an important role. The more it became vital to the war effort the greater was the risk that it would be subjected to a blitz from the Luftwaffe. In spite of that, it remained woefully unprepared for attack. For Belfast, like Coventry, there was to be no gradual conditioning. When the Luftwaffe squadrons first struck, on Easter Tuesday night 1941, the sudden and sustained bombardments devastated the city. Equally seriously, civilian morale was shattered.

This book examines the reasons for the authorities’ lack of preparation and describes the full terror of the blitz. It also details how the raids exposed extreme poverty in Belfast. It considers the impact on social policy and on the emerging welfare state, particularly in housing provision and health care. It assesses their effect on sectarian relations within the city, on North/South relations and on the relationship between Stormont and Westminster. It can claim to be by far the most wide-ranging, comprehensive and accurate account of the Belfast blitz yet written.

Drawing on a rich range of primary and secondary sources it gets closer to the events described than any previous publication. Large numbers of people, including first-hand witnesses, were interviewed, and documentary material was assembled from some thirty archive centres – including private diaries, memoirs and correspondence, civil defence message books, Belfast City Council papers, accounts by British and American servicemen, intelligence files, meteorological records, and military war diaries and analyses.

Vividly illustrated with almost two hundred original photographs, many previously unpublished, the book also contains for the first time the full list of civilian dead – almost nine hundred names. It will thus serve as a timely memorial, on the seventy-fifth anniversary, of one of the devastating periods in Belfast’s history.

Brian Barton was born in Dunkineely, County Donegal, in 1944, was educated at Methodist College, Belfast, graduated from Queen's University Belfast in 1967, was awarded an MA by the University of Ulster in 1979, and completed a PhD at Queen's in 1986. He lectured at the College of Business Studies, Belfast 1971- 1994, tutored in modern history with the Open University, 1995- 2013, and was a research fellow at Queen's and at Churchill College, Cambridge. He has authored or edited twelve books on Irish history and politics. His most recent publications include: The Secret Court Martial Records of the Easter Rising (The History Press, 2010), and he co-authored with Michael Foy, The Easter Rising (the History Press, 2011). He co-edited with Patrick Roche, and contributed to, The Northern Ireland Question: The Peace Process and the Belfast Agreement (Palgrave Macmillan, 2009). He also contributed chapters on Northern Ireland to A New History of Ireland, Vol. VII, Ireland 1921- 1984, produced by the Royal Irish Academy (Oxford University Press, 2003).

The Belfast Blitz: The City in the War Years£19.99